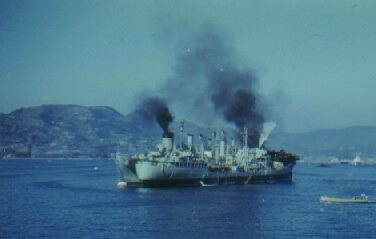 A river that rises in the northeastern corner of Ohio and thunders in a generally westward direction some 40 miles before emptying into Lake Erie. A county and a town named Ashtabula are also located in Ohio.

Fleet oiler (AO 51) was laid down on October 1, 1942 as maritime commission hull number 717. The USS Ashtabula is the first ship of the fleet to be named in the honor of the Ashtabula River in the State of Ohio. Ashtabula is an Indian word meaning ‘Fish River’. She was launched May 23,1943, under the sponsorship of Mrs. Adolph Berie, wife of the Assistant Secretary of State. The USS Ashtabula was commissioned on August 7, 1943 under the command of Commander Louis J. Modave, USNR.

After completing a one month training period, the USS Ashtabula sailed on September 11, 1943 from Norfolk, Virginia, to the South Pacific, operating as a unit of service Squadron Eight. She returned to San Pedro, California in December for a brief upkeep period. The 1st of January 1944 found the USS Ashtabula underway again headed for the Pacific theater. She remained in the Pacific for months, providing support to the various ships of the Pacific Fleet. Returning to San Pedro in July 1944, four twin 40mm antiaircraft mounts were installed and some much needed repairs affected. On August 28th, the USS Ashtabula sailed westward for her third Western Pacific deployment. She plied the waters of the Philippine Sea providing replenishment services to various Navy Task Groups involved in the invasion of the Philippines. It was during this deployment that the USS Ashtabula experienced what certainly was her most memorable day, October 24, 1944. She was proceeding to night anchorage with her Task Unit when she was sighted by four Japanese planes as their target. At 1848, a torpedo struck her port side opening a hole 34 by 24 feet. Incredibly, no fires erupted nor were any crew members injured. Despite the damage, the USS Ashtabula opened fire as the enemy planes circled overhead. The ship developed a list of 14 degrees to port and both radar and radio on the bridge were knocked out. Less than one hour after the torpedoing, the USS Ashtabula was making ten knots and on an even keel. The next morning, only 12 hours after being hit, the oiler was credited with shooting down an enemy aircraft. The next few days the she continued to steam, transferring her remaining fuel to various ships. On November 1st, the ship sailed into Long Beach, California for repairs. Within three months the USS Ashtabula was back in battery and on January 28, 1945 she embarked on a twenty month deployment, servicing units of the SEVENTH FLEET, until the end of the war. Then continued serving in the Pacific and traveling to the Indian Ocean port of Rastanura, Saudi Arabia to unload fuel.

During the next several years, the USS Ashtabula proved to be a true workhorse of the fleet, servicing hundreds of ships and traveling thousands of miles. She averaged more then one deployment each year and her voyages took her to such places as Guam, Palmyra Island, the Marshall Islands, Bahrain, Saudi Arabia, Eniwetok, Japan, China, Taiwan and even Point Barrow, Alaska. The early 1950s found the USS Ashtabula actively involved in the Korean War. She Served as the Flagship for the Task Group 79.1 providing services to the SEVENTH Fleet Units involved in bombarding Korea.

Additionally, the USS Ashtabula assisted in the evacuation of Hung Nam in November, 1951. After a brief overhaul period in Mare Island, California, she returned to West-Pac. On November 30, 1952, the USS Ashtabula was completing an upkeep period in Sasabo, Japan alongside repair ship USS AJAX when tragedy struck. In the early afternoon, gasoline fumes in two of the forward tanks ignited and the force of the explosion caused the 01 deck to curl back to the superstructure. Several storerooms and bulkheads were destroyed. A portion of the port side hull split allowing sea water to rush in, deck equipment was thrown from the deck landing harmlessly in the water. Miraculously, only six people lost their lives. Repair work took three months to accomplish and the USS Ashtabula returned to normal replenishment duties.

The next decade proved that the USS Ashtabula could “Stream and Pump” with the best of them. In addition to several deployments to various areas of the Pacific Ocean, she is credited with several significant accomplishments. In 1955, the USS Ashtabula assisted in the evacuation of Hanoi, French Indochina (now North Vietnam). On April 23rd, 1964 she became a Golden Shellback crossing the equator exactly at the International Dateline enroute to Australia. The USS Ashtabula conducted the first underway replenishment during the Vietnam conflict when she refueled the USS MADDOX only a few hours after MADDOX was attacked by North Vietnamese Torpedo Boats. The proudest moment of the ship’s first twenty-five years of service came on October, 1967, when the USS Ashtabula received the Arleigh A. Burke Fleet Trophy award from Vice Admiral Bernard F. Roeder, Commander First Fleet.

Shortly before receiving the Alreigh A. Burke award, the USS Ashtabula entered Todd Shipyard in Long Beach, California for modernization. This planned modernization was an extremely complex engineering feat. A Completely new midsection was built and subsequently launched at Todd Shipyard on July 9, 1967. Then in August, the USS Ashtabula’s bow was separated from her stern and min-section. The new midsection was then brought into the drydock and joined to the old bow. One month later the original stern was connected and the new USS Ashtabula was born. One year later on October 19, 1968 she was placed back into commission, complete with a new auxiliary machinery plant and increased cargo – fuel capacity. The addition of cargo storerooms, freezers and magazines made her the Pacific’s only multi-product oiler.

In May of 1969, after nearly a two year absence, the USS Ashtabula was again in West Pac providing bullets, beans and black oil to the SEVENTH Fleet units on Yankee Station. During this maiden voyage as the “New” Ashtabula, the “Flying A” was awarded the Meritorious Unit Commendation for her sterling support of the fighting ships of the Fleet. During the next couple of years, she spent much of her time supporting the Vietnam war effort, taking only brief respites for needed maintenance and repair work. In early 1973, the ship’s fuel system was converted from black oil to naval distillate, and in April, she received her new 3″/50 caliber gun mounts. For nearly thirty years the USS Ashtabula home was Long Beach, California but in June 1974, she sailed for her new home port, Pearl Harbor Hawaii.

The USS Ashtabula arrived in West-Pac in early 1975 and provided critical support to Operations Eagle Pull and Frequent Wind assisting in the evacuation of Vietnam just as she had done twenty years earlier. In May of that year, she was ordered to Cambodia to support forces recapturing the container ship, SS Mayaquez, which had been seized by Khmer Rouge rebels. A Subic Bay upkeep period was cut short as the USS Ashtabula celebrated the nation’s Bicentennial in Guam as she headed to West-Pac for the 29th time in her illustrious career.

On April 30, 1982, the USS Ashtabula bid farewell to family and friends for her thirty-second and, regretfully, final deployment. Visiting several ports she had seen many times during her 39 years of service and entering the Realm of Neptunus Rex one last time, the USS Ashtabula finished her final cruise. On August 5, 1982, the “Grand Old Lady” steamed for the last time. Her crew manning the rail provided an impressive sight, each sailor happy to be home, but each shedding a tear knowing that the Navy’s finest ship that had served her country, through three wars and forty years, was to never sail again as a man of war in the United State Navy. The USS Ashtabula, the ship that had steamed more miles and pumped more fuel than any Navy ship ever has, or probably ever will, was decommissioned on September 30, 1982.